I’ve reread Harry Potter about a million times now but during September/October I reread Harry Potter for probably the first time since I started college which was 5 years ago. As I’ve become more and more involved in feminist theory and pop culture, I wanted to see if Harry Potter live up to the heralding feminism that it has been known for all these years especially in its feminist icon, Hermione Granger.  I will discuss some observations I’ve made through a feminist lens. 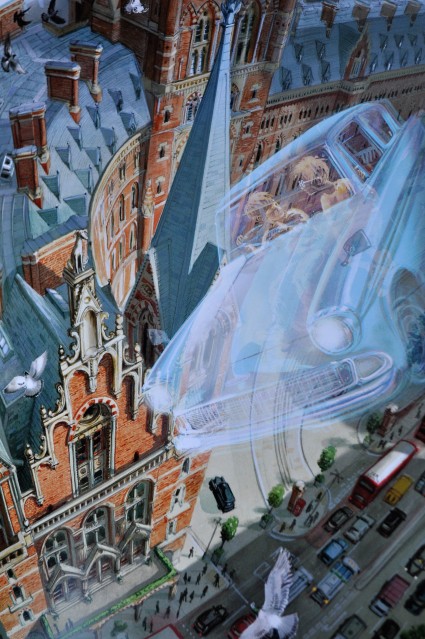 Let’s first talk about Lily Potter. For all intents and purposes, Lily Potter is a Mary Sue and used essentially for man pain. In fact, Snape’s entire backstory, present, and future was dependent entirely on his love for Lily Potter. That love manifests through him. Yet Lily Potter is never truly presented as a true character separate from her relationship with either Harry, James, or Snape. For most of the series, she is used as a symbol of love. As it is stated repeatedly, it was her love and sacrifice that has allowed Harry to be safe from Voldemort this entire time. What was she good at (besides Potions as Slughorn consistently repeats)? What were her dreams and aspirations? You could argue that she is not alive in Harry’s world and therefore not truly a character anyways yet why does James Potter and the rest of the Marauders feel more like real characters? In The Order of the Phoenix, Harry realizes that what he has always thought his father was: courageous and selfless turns out to be a lot more complex. As we know from experiencing Snape’s memory, James Potter is rather arrogant and honestly a bully.  You get a real sense of who he was mainly because it is mirrored through Harry but do we really know who Lily was? Not really. She is seen first and foremost as a mother who sacrificed her life and love for Harry and is defined by this throughout the series as a beacon of those symbols instead of a person full of love and sacrifice. There’s a difference.

I think my frustration with it stems from the fact that a lot of the male characters are allowed to be morally grey. Sirius, James, Snape, Dumbledore, Grindelwald, and Draco Malfoy are allowed to have morally ambiguous storylines that never undermine who they are as characters and are always offered some sort of redemption. Meanwhile I rarely see the female characters if any straddle this fine line. They are either solely on the good side or the bad side. Mrs. Weasley, Tonks, Professor McGonagall, Aunt Petunia, Luna and Hermione are all placed firmly on this “good” side. Although they are distinguished characters, they are by no means ambiguous. The only ones I would consider to be so is Umbridge, Merope, and to some extent Narcissa. Although if we are judging by moral ambiguity, Umbridge is not really an ambiguous character so much as a “good guy” in the loosest form of the word who is highly, highly annoying and just plain ignorant but really does nothing to redeem herself. The only one that does so in story only is Merope who uses a love potion to manipulate Tom Riddle Sr. to fall in love with her. Though this is incredibly manipulative, the reader understands that she is misguided and the product of an entire life’s worth of abuse. But still that’s really only 2 female characters who would be considered morally grey but that is very little compared with the plethora of ambiguous male characters.

Phoenixes in HP & the Chamber of Secrets illustrated edition

It wouldn’t be the only example of female characters being erased from having a personality and a character arc. Hermione, herself, the feminist icon, although she has her flaws and her strengths does not have much character development. She is always selflessly serving the main plotline.

She oftentimes feels like a plot device especially in the last book where she repeatedly gets them out of sticky situations but never actually solves anything. One example is in the Chamber of Secrets where she discovers that the monster in the chamber of secrets is a basilisk. The paper that she finds it in is conveniently discovered by Harry who then proceeds to fight the Basilisk while she is Petrified in the hospital wing. Another prime example is in Luna’s house where they somehow get out with Hermione’s ability to know more spells and assess the situation before the others as well as conveniently having everything in her little bag but the real solutions to kill the Horcruxes come from Harry and Ron even the information to actually kill the Horcruxes came from Hermione. It is clear that Harry and Ron would not have survived without Hermione but it feels like she is being used more as a useful tool than a real person. In terms of character development I have a hard time understanding what Hermione’s ambitions are. To be fair, we don’t really get a good grasp on Ron’s ambitions either but somehow Hermione’s seem more vague to me. It is adamantly clear however, that Ron definitely has more character development. He is allowed to walk out on them and have his own time to figure things out for himself. Hermione does not get that luxury. We also, barely know who her parents are and what they are like which is essentially the character development. On the other hand, we get to know Ron’s brothers and Ginny and how they have shaped Ron’s life views. The only time it has ever been clear has been when she was in the throes of SPEW.

It’s kind of funny that Ron and Hermione are prefects. For all intents and purposes, it is not a surprise that Dumbledore chose Hermione to be a prefect, however, Ron? It is unclear why Ron should be prefect, not because he is incapable of being one but because throughout the series, he has never shown a tendency to rule following or even particularly any tendency towards leadership. His grades aren’t the best either. It was even more uncomfortable to me when Dumbledore told Harry that he did not make him prefect because he thought Harry “had enough to be getting on with.” Harry would literally make the worst prefect ever! He is always getting himself into trouble and getting into other people’s businesses including but not limited to getting out of bed at night, going into Hogsmeade without permission. I’m not saying I wouldn’t do these things if I were in Harry’s shoes but the fact is is that it’s not prefect material. Meanwhile on the other hand, Hermione is the perfect prefect material. She is dedicated to her studies and to the rules making her the ideal role model for young first years. I think it speaks to how Hermione who consistently uses her intellect to get shit done is consistently overshadowed by the boys who dont’ have much but their own intuition to follow. I think it’s a consistent pattern that I see in books and movies where a boys intuition and recklessness is valued over a girl’s intellect.

Dumbledore tells Harry to listen to Hermione when he was talking about Sirius and Kreacher and Occlumency. Time again, Hermione’s opinions are valued less than the boys’. Whether that is a statement on sexism in the world in general that JK Rowling wanted to bring to light or if JK Rowling is subconsciously projected some ingrained sexism into the books, I don’t know. I have a feeling it’s a bit of both although if it is a statement what we only get from it is that Hermione is obnoxious and Harry continues to not listen to her anyways so I’m not exactly sure we are suppose to be siding with Hermione.

Just because female characters are badass and take no names does not mean that the context itself is feminist. Hermione may be smart and kickass and someone every little girl wants to be, it doesn’t really focus on the fact that she is treated through a feminist lens. She is often seen with the other women of the books as naggy and a complete rule follower. More and more, the male characters are seen to have more distinct personality traits. It also does not negate the fact that although JK Rowling has mentioned in interviews that when you take away physical strength from the equation, witches are just as powerful as wizards. Yet most of the major players of the Harry Potter world are male, the ones who propel the story forward, the ones who have higher positions of authority and even the ones that are deemed the most important to the narrative of the story. For example, the Mauraders are all male. We have Dumbledore (who is essentially a father figure to Harry), Snape (the most tragic of the series), Voldemort (the main villain), most of the people in the Order are male including Kingsley, Moody, Mundungus, and Moody. Most of the Death Eaters are male, Lucius, Wormtail. All of the Defense Against the Dark Arts teachers were male. So really all of the major, major players are male so this statement does not really hold up does it. I also found the characterization of Lavender Brown to be slightly off putting. From someone who has always makes sure her characters are well developed and distinguished it is odd that she would make Lavender Brown such a hysterical, ditzy female. The characterization when even compared to the other small male side characters is jarring. Seamus, Dean, and even Wood have, throughout the series, become more and more complex however small their role is in the book yet Lavender Brown, Alicia Spinnet, Angelina Johnson, and Katie Bell have no distinguishing features. Even Ernie Macmillan who we only saw briefly in the fifth book is more distinct. The lack of distinguishing characteristics to females as opposed to males is disheartening and negates female characters to certain roles rather than seeing them as distinct people on their own.

Reading Harry Potter again through the feminist lens has made me realize the extent that the books do not live up to feminist critique. It can be said, however, that the book definitely have feminist aspects to it which I totally agree with but it is not entirely faultless. I will always love these books but I bear these in mind that Harry Potter is not infallible.

9 thoughts on “An Analysis: Sexism in Harry Potter”