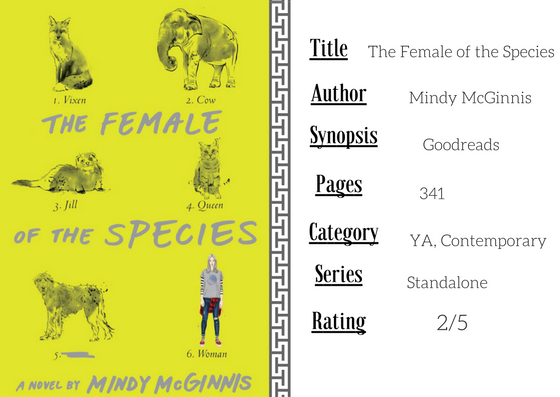 I decided to give this book a shot after hearing it was such an insightful deconstruction of rape culture and everyday misogyny. Instead what I got was that odd feeling of reading a different book than everyone else and a lot of wasted potential.

Three years ago, Alex Craft’s sister was raped and murdered and now Alex spends her time getting violent revenge on those those who have wronged women. We follow two other perspectives: one is from Jack who is the school’s golden boy who’s really interested in Alex and Peekay, the preacher’s kid who befriends Alex. She is dealing with the aftermath of breaking up with her boyfriend and seeing him with someone else. Both Jack and Peekay form friendships with Alex throughout the book. It fits mostly into the coming of age of YA contemporary.

What could have been an amazing look at victim blaming and slutshaming in our culture right now especially in high school turned into such a generic story. Where did it all go wrong? First of all, one that thing that stood out to me was the overcliched romance. Popular jock (Jack) is in love with Alex, the outcast girl. Can it get any more cliche just from the setup alone? Jack’s perspective was all about how interested he was in Alex and what a special snowflake he thought she was

Other girls push the dress code, showing a solid few inches of cleavage or leggings that hug so tight you don’t need an imagination…But Alex is different, remarkable because her clothes are utterly nondescript.

But Jack’s perspective is apparently about more than just the generic romance. A lot of reviews I’ve seen have said that Jack stands for the male gaze and the ingrained problematic views that comes with that privilege. If that’s the case, then Jack’s point of view is completely useless because there is no sense of development or even reassertion of these so called problems. The quote mentioned above is a problem of sexism, of girls having to reject their femininity in order to be considered worthy, but Jack never changes this perspective throughout the book consistently commenting on how Alex is different. And simply stating a problem is not going to cut it if you want to start a conversation about this important topic. It’s like my friend telling me her house got robbed and not telling me how she felt about it. Aside from that, I never thought I really got to know Jack (what does he even like??) or for that matter any of the other characters including Peekay and even the main character herself.

Peekay spends the novel dealing with the aftermath of breaking up with her boyfriend. She gets the most development out of all the perspectives. Peekay is sort of a stand in for girl on girl hate. She consistently slut shames her ex’s current girlfriend  Branley (the hot IT girl at school). I liked her story the most as she comes to realize that Branley is just a human being who likes sex. I liked these aspects but they always felt only surface level to me, never reaching the kind of character depth that I was craving.

Alex, our main character, dishes out nuggets of wisdom on misogyny but it always feels out of place like the author put these thoughts here without any proper context. Plot events happen so that these nuggets could be placed. Like aha! this is an example of victim blaming wink wink. In fact, I wish the author just made a list of all the everyday sexism that exists and it wouldn’t have made a difference. As with the other main characters, I never felt I knew Alex. The fact that she gets revenge on her sister’s killer by murdering him (not a spoiler, it happens in the first two pages) doesn’t have any sense of weight let alone repercussion until the very end. That could be excused because Alex is a sort of wish fulfillment character, a character that acts on what some women feel or want to do about the injustices put on them but the whole reason she did this was because of her sister and I never even got to know about her sister. She is a vague presence in the novel and if the author spent even a little bit of time developing her, I would understand Alex’s motivations, her attitudes, and it would have made the story’s themes that much stronger.

Characters aside, the plot was again so much wasted potential. The “shady” characters devolve into stereotypical “back alleyway” stereotypes of rapists portrayed in the media. The book also ends in a “showdown” of sorts which completely reduces Branley to the jealous girlfriend type that is so common in korean dramas and completely degrading to her as a character. This book is suppose to be about sending messages as to how slut shaming and victim blaming and not judging someone by how many sexual partners a girl has and Branley was the target of a lot of those but in the end, her character was given no justice, reduced to another trope when the whole novel hints that she was someone other than what Peekay made her out to be, the deconstruction of the stereotypical “bitch”. The ending takes away from all that progress that the author was trying to tell us. There is no sense of growth, of realization, of irony or deconstruction of the social commentary that the author was trying to point out this entire novel! Instead, what I got was a sort of martyred wish fulfillment ending that feels false and doesn’t solve anything. These problems haven’t been solved yet so it’s fine that the book can’t solve it but it doesn’t raise any thought provoking questions either.

I get the author’s intent and I admire it; she talks about the subtle ways that society treats women compared to men. I also especially love this quote.

Tonight they used words they know, words that don’t bother people anymore. They said bitch. They told another girl they would put their dicks in her mouth. No one protested because this is our language now.

This is such a great concept to explore; it has multiple facets and ideas hidden in it. But it was just sort of thrown in there. Unfortunately, the generic story and generic characters and lack of any sort of development and nuance to both characters and plot just kill (pun not intended) any sense of an insightful look inside any of these issues she sought to criticize.

6 thoughts on “Book Review: The Female of the Species by Mindy McGinnis”