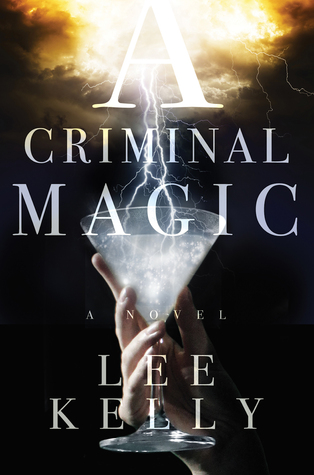 I received a free copy from Lee Kelly’s publisher, Hannah, so thank you for that! All opinions are my own.

When I read the summary of A Criminal Magic I thought to myself, wow this book hits all the buzzwords I love to read about in a book. It combines magic in a 1920’s historical setting (my favorite era besides you know the racism and sexism..). It has a star-crossed romance. It has mafia gangs, smugglers and a dark criminal underworld. AND it is a cross between The Night Circus and the Peaky Blinders. I mean can you really ask for a better combo? I should have known a summary as good as this is almost always too good to be true (unless of course, you are talking about the Night Circus in which cause the summary is as good as the execution). It’s a shame that ACM does not deliver on any of these accounts.

In any book, it’s ok if you have a weak plot, it’s ok to have weak worldbuilding, it’s ok if you have weak dialogue, it’s ok if you have weak side-characters, as long as you have stellar main characters. What is not ok is if these main characters suddenly dropped dead, I would not have felt anything for them. Joan Kendrick is a typical heroine who worries only about caring for her cousin and sister. The problem is that this is the only trait that defines her which frankly makes her really boring. Alex Danfrey wants to infiltrate the Shaws, a notorious gang, and separate himself from the name of his father. His character was so inconsistent especially after he met Joan because he literally forgot about everything for the sake of true wuv. *rolls eyes* Don’t even get me started on the romance. They basically fell in love after one interaction and afterwards, they’re already thinking about the other person 24/7. They basically are working for other people that are rivals to another and you would expect a star-crossed romance to have more tension but no, no tension, and basically no conflict.

What about the magic? At first, I thought the sorcerer’s shine was pretty cool and well-explained. It’s basically like alcohol that acts like weed, a drink that gives you a high. But then it started getting convoluting because the book started adding illusion magic, and portals, and blood magic. It all became too convoluted with literally no rules for how anything worked. It just sort of happened. I was also looking froward to descriptions of the 1920’s historical setting but I got..none..

The plot itself was basically non-existent. I think there’s some conflict between the gangs and another conflict about Joan trying to earn money to save her dying bar business with her family? Joan spent most of the time training, Alex infiltrating the gang..All of the action happened near the end of the book but by then, I just didn’t care anymore.

The side characters, as I mentioned before were really weak. There was Grace, Joan’s friend, Gunner, Joan’s trainer, Boss McEnvoy, leader of the Shaw gang. They would be one way and then suddenly get the motivation to act the opposite way because it was convenient for the plot.