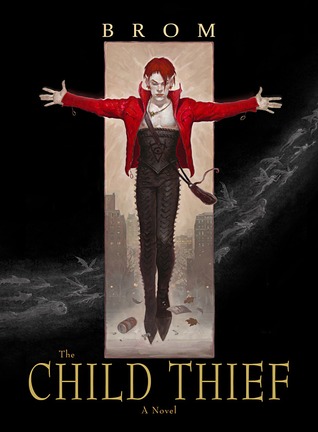 There are some books where you can pinpoint exactly when you started falling in love with it.

I fell in love with this book at the end of the prologue, with the line that sent chills down my spine:

If the girl could only have spoken to the other boys and girls, the ones that had followed the golden-eyed boy before her, she would have known that there is always something left to lose.

The words are nothing short of haunting but then again, this is a haunting sort of book. And you go into this book knowing that but I didn’t know it would have such a whimsical feeling to it reminiscent of traditional fairy tales that we’re use to reading. So it was kind of like reading a crossover between Lord of the Flies and The Chronicles of Narnia all wrapped into one.

The funny thing about the child thief is that Brom really knew the story of Peter Pan. He knew that if he wanted to write a dark, violent, and scary book (this book has all of that) about a boy who never grew up; he didn’t have to make it up. Because if you think about it, the original story of Peter Pan is actually kind of scary. It’s not about a fun-loving and harmless boy who just doesn’t want to grow up. It’s about a fun-loving, jaded boy who seduces lonely and damaged children from modern day to follow him into this strange land. Our main character, Nick, is escaping ruthless bullies and a loveless home. It’s no wonder that he follows Peter into the land with no grownups.

The band of Lost Boys mindlessly follow Peter yet you feel for them as you learn about their pasts and how they’d rather die than go back to the brutal histories they’ve escaped. But what I loved about TCT is that this dark brutality does not take away from the feeling of wonder that you get when you read a fairy tale fantasy. The land Peter takes the Lost children to is filled with magic and whimsical but equally scary  creatures. It seamlessly weaves together old Scottish folklore  and legends and the way Brom writes it makes it feel like you’re reading an old legend.

The plot itself is about saving the lady of Avalon who’s life spirit essentially keeps this land alive. It isn’t a slow-moving book; it moves like our character Peter, in spurts and bursts of action  with very dark under tones and with jarring violence but is also charismatic begging the reader to question whether Peter is a hero, an antihero, or just a villain.

Of course, I still have some gripes as I always do. I wish some of the characters that appeared prominently in the third act of the book were introduced early so it wouldn’t seem contrived. I also wish Brom had done more with the girls in the book. I wish I got to see Wendy and Tiger Lily (although I think the equivalent of Tiger Lily is actually one of the characters).

This story feels different that a lot of fairytale retellings I’ve read and that’s a feat unto itself.

Side note: If you haven’t already, check out my post for a Week in Favorites event I’m planning to do this month. I would greatly appreciate your opinion! 🙂

2 thoughts on “Book Review: The Child Thief by Brom”